Phil's Grill
I live with my wife in the Pacific Northwest and enjoy the outdoors. I have cooked meals in a dutch oven over a campfire to assisting my father, a professional chef, prepare elaborate entrees and specialty menus for clients. My passion is grilling and exploring different avenues of preparing food. I love to experiment with all types of spices and attempt the unusual. You are just as likely to see me out grilling with 30 below temperatures and snow on the ground to summer weekends grilling for friends and family.

We are back from the 2011 HPBE Expo held at Salt Lake City Utah. Great show! The new line of barbeque grill covers are exciting and so are some of the grills. One thing we noticed at the show this year was fewer gadgets and gimmicks. The big trend appeared to be built in system and custom system around your premium barbeque grill. Manufacturers and distributors were much more willing to talk with on-line retailers as viable partners notably one manufacturer quoted 120% increase due to online marketers. We are excited to see some of these changes and they will be effecting GrillingSpecialists
Posted by Phil's Grill at 4:08 PM No comments:

dessert to go with any barbecue

This carrot cake recipe is the best I have made. The recipe was shared with me back in 1989 by a coworker. Enjoy and watch your guests light up with the first bite.
Carrot Cake
2 cups sifted flour
1 1/2 cups of vegetable oil
2 cups sugar
4 eggs
2 teaspoons of cinnamon
2 teaspoons of baking soda
2 teaspoons of baking powder
1 teaspoon of salt
2 teaspoons of vanilla
3 cups of shredded carrots
1 cup chopped nuts
Mix sugar and oil together and beat very well until the mixture looks fluffy. Add eggs then add dry ingredients alternately with the carrots, mix well. Add nuts. Pour into greased and floured 9X13 pan and bake at 350 degrees 45 to 60 minutes. Done when toothpick comes out clean. Cool completely.

Frosting:
1 8 oz. package creme cheese
1 stick butter
1 one pound box of powdered sugar (3 and 3/4 cups)
2 teaspoons of vanilla
dash of salt
chopped walnuts
Mix creme cheese and butter add rest of ingredients mix well. Frost cake. (little known secret the texture of the cake is better if frozen for a day and then thawed)
Posted by Phil's Grill at 1:57 PM No comments:

This recipe was shared with me many years ago by a very good cook Carol Sherman. Although it is still cold outside these mouth watering spareribs are sure to stir the enthusiasm for thinking about grilling. Hope you enjoy.
Indoor barb-o-que spareribs
2 sheets of spareribs (about 4 pounds)
1 teaspoon of chilipowder
1 tablespoon of celery seed
1/3 cup of brown sugar
1/4 cup vinegar (I use red wine vinegar)
1/4 cup worchestershire sauce
1 cup catsup or 8 oz. of tomato paste
2 cups water
1 1/2 tablespoons of liquid smoke
few drops of tobasco sauce (however hot you like it)
2 tablespoons of lemon juice (I use fresh lemons)
1 onion chopped

Baked potatoes and a green salad are good compliments to the meat.

Beginning of a new season 2010 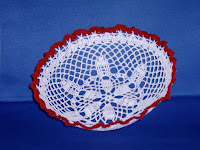 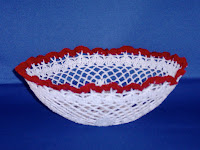 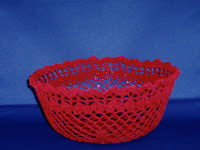 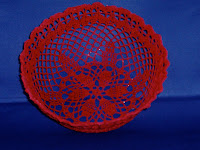 Happy New Year to Everyone. This year should be our best one yet. We have new products, providers and recipes to keep everyone looking forward to the next barbeque and backyard party.

Our new year advertising special is just in time for Valentines Day.
The first six - $50 purchases from www.grillingspecialists.com will receive one handmade crocheted lace bowl (total is calculated on the product dollar amount without shipping costs).

Get this limited handmade beautiful crocheted lace valentine bowl while available. The first six qualifying orders will receive either an all red, red with white trim, or white with red trim bowl (our choice). The size of the bowl is approximately 26 inches around, 8.5 across and 4 inches deep. Because each bowl is individually hand-made, the size is approximate and may be larger or smaller than stated.

This bowl makes a beautiful center piece for your dining room table or dresser. It can be a thoughtful, stunning gift for someone special on Valentine's Day. Go to www.grillingspecialists.com now and be one of the first six to make a qualifying order.
Posted by Phil's Grill at 5:52 PM No comments:

Winner of the Grillin'opoly game!

Congratulations to NJ who won the fabulous board game Grillin'opoly!
Thank you to all our readers who made this campaign such a huge success. We had several wonderful critiques to Grilling Specialists.com/which enabled us to improve the site and make it easier to navigate. We also added to our customer base extending to the east coast. '

Our 'Keep the enthusiasm building for Grilling' was so popular we are campaigning again for the month of March and the give away merchandise is a a six pack of cedar planks to use on the grill. If you have never eaten grilled salmon on a cedar plank you are in for one tantalizing experience. Included with the cedar planks will be recipes and instructions on how to best use the planks.

To be entered in the give away go to Grilling Specialists.com/then return to Phil's Grill blog and let us know you visited, that will give you an entry. If you make a statement about what you liked about the site or make a suggestion as to how to make the site more appealing to visitors (whether we use the suggestion or not) you receive a second entry. On the last day of March a random drawing will occur and you could be the next winner. Only two entries a day are allowed (sorry) however you can visit each day and browse to see what new merchandise we have added and if you return to Phil's Grill and let us know you visited, you get another entry.
Thanks again for all your support.
Posted by Phil's Grill at 6:22 PM 2 comments:


If you think barbequing ribs is hard, read this article. I have eaten barbeque in half of the 50 United States and I've been cooking it for over 20 years. My grandfather first introduced me to barbequing when I was just a kid. Some people call cooking meat on a grill "barbequing", some call it "smoking" meat, and some people just call it "grilling" meat. Believe it or not, these terms aren't really interchangeable. They are all different methods of preparing what is generally known as "barbeque" and cooking GOOD barbeque is NOT easy.
I could eat barbequed beef, pork, fish, or chicken every day. Good barbeque is amongst the best food on earth but my absolute favorite, bar none, is barbequed pork ribs. The smoky flavorful rib is untouchable when it's prepared correctly but really getting ribs correct can be easier said than done. It takes not only knowledge, but patience to get good barbequed ribs. Many people pull out the grill, throw some meat on it, slop sauce all over it, and call it barbeque. HA! Surely you jest!
Barbeque Ribs: The Basics
You probably need to get some practice before you really attempt to barbeque some ribs. Because of their relatively small amount of meat, they are very easy to mess up. It's probably best to start off with a bigger cut like a pork shoulder or Boston Butt. They are alot harder to burn and dry out and good choice to learn the fine art of seasoning. Yes, ribs can be difficult, especially if you try to rush them, but there is NOTHING better to eat. The pork spare rib, not the babyback, is my rib of choice. It's the first thing that people ask for when they ask for barbeque. There are a few ways to screw up ribs and I'll describe a few of them before you go getting any bright ideas about how you're going to prepare your own.

Boiling
This is the number 1 rib sin. I have known people to be arrested by the police and incarcerated for boiling ribs. In fact, some say that the reason the economy is so bad today is because members of Congress were boiling ribs in the White House.

Broiling
Using an open flame to cook ribs isn't barbequing, it's cooking. Many restaurants offer their "baby backs" prepared like this. Flame broiled ribs are kind of like crack cocaine: You may think you like it, but you really don't and it will ultimately kill you.

Baking
I have eaten ribs prepared in the oven but only because it was a choice between that and boiled squid. Anyone who tells you that they can get ribs from the oven that taste as good as ribs off a grill is either lying, crazy, or both. Ribs are prepared on a grill. Cake is prepared in an oven.

You can also add some brown sugar if you want to mellow out the cayenne and black pepper.
Mix your dry ingredients in a bowl. Don't be afraid to taste your mixture. If it tastes bad on your finger, it'll taste bad on your ribs.

The first thing you'll want to do is rinse your rack (ribs) in cool water. If you're making spare ribs, there may be a boneless cut of meat on the underside of the rack. I usually trim that off and cook it separately. It cooks faster and makes for great samples or goes well in your baked beans. You'll also want to trim any excess fat off the ribs. Next, massage your rub into the ribs; don't be shy, get in there and rub 'em down good with the dry rub on both sides until you've got a good, thick coating. Next, wrap the slab up in plastic wrap and place it in the fridge overnight. Good barbeque is a two day process.

Slow cook your ribs away from the direct heat on your grill. Start them with the meat side up. A good cooking time is about 6 hours at about 180-200 degrees. Unless you have a "rib rack" in your grill, you'll need to flip them about three quarters of the way through. You'll know when they're done when the meat starts to shrink and pull away from the bone. To keep them from drying out, mist them with a mixture of half apple juice and water once or twice while they cook.
If you have a good barbeque rib recipe or have questions, PLEASE contact me at Tghini@gmail.com

About the Author
T Edwards has a PhD in BBQ. He's been eating barbeque for nearly 40 years and loves to add new recipes to his overstuffed recipe book. He lives with his wife, two daughters, and two barbeque pits. http://barbeque-rib-recipes.blogspot.com

Grilling enthusiasts we are down to 9 days left until the drawing for the Grillin'opoly game. If you want to get in a few more entries go to / Grilling Specialists.com look the website over and comment on Phil's Grill. The drawing will be held February 28Th. The winner will be contacted by e-mail. Good luck to one and all.
Posted by Phil's Grill at 5:39 PM No comments: